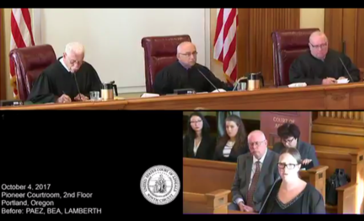 ​On May 11th, 2018 we argued that the administrative law judge’s (“ALJ”) failure to make written findings regarding transferability of skills, required by Social Security Ruling 82-41, prevented the panel from determining whether substantial evidence supported the ALJ’s determination at Step Five of the sequential evaluation process that claimant was able to perform other work and therefore was not disabled under the Act. The panel held that neither the ALJ nor the vocational expert stated what skills, if any, claimant had acquired from his past work and whether those skills were transferable to the semi-skilled jobs identified by the vocational expert. The panel concluded that SSR 82-41 obligated the ALJ to make transferability of skills findings.

We won a major victory for Social Security claimants at the United States Court of Appeals for the Ninth Circuit, which covers nine western states including Oregon, Washington, and California. Zavalin v. Colvin creates precedential authority that may eliminate dozens of the jobs used by judges to deny claimants with mental or cognitive impairments. The case holds that reasoning level 3 jobs are inconsistent with a limitation to simple and repetitive tasks. We look forward to this case being cited in hundreds of appeals across the country. Zavalin v. Colvin, No. 13-35276 (9th Cir. Feb. 20, 2015), available at http://www.cdn.ca9.uscourts.gov/datastore/opinions/2015/02/20/13-35276.pdf

Lamear v Berryhill
We prevailed on the issue of whether an Administrative Law Judge must consult a vocational expert on issues related to limitations in the use of one hand. We are hopeful that this published decision will lessen the impact of a previously decided case we were not involved in, Gutierrez v Colvin, which did not require the judge to consult an expert in relation to overhead reaching. The government argued for a rule that would have held that significant limitations on the use of one hand would be immaterial to whether an individual could perform a job. The Ninth Circuit rejected that argument and remanded the case for a new hearing. Lamear v. Berryhill, No. 15-35088 (9th Cir. Aug. 1, 2017), available at

Brooks v Astrue
The United States Court for the District of Oregon reversed the Administrative Law Judge’s decision and remanded the claim for the immediate payment of benefits, finding our client disabled since 1984. Brooks v. Astrue, No. 3:11-cv-01252-SI (D. Or. Oct. 3, 2012), available at http://docs.justia.com/cases/federal/district-courts/oregon/ordce/3:2011cv01252/104579/18

Beaver v Astrue
The United States Court for the District of Oregon reversed the Administrative Law Judge’s finding that the claimant was not credible and remanded the claim for the immediate payment of benefits, crediting the opinion of claimant’s treating physician in a functional capacity questionnaire generated by our firm. Beaver v. Astrue, No. 3:11-CV-00719-BR (D. Or. July 5, 2012), available at http://docs.justia.com/cases/federal/district-courts/oregon/ordce/3:2011cv00719/103014/21

This is a heading

This is a paragraph.